Earlier this year I was lucky enough to participate in the legendary Downbeat Blindfold Test which was just released in the January issue! They picked some phenomenal tracks, many of which were unknown to me, and everything they played I absolutely loved. And, I don’t say that very often being the hypercritical person that I am…!!! Full text from the blindfold test below. 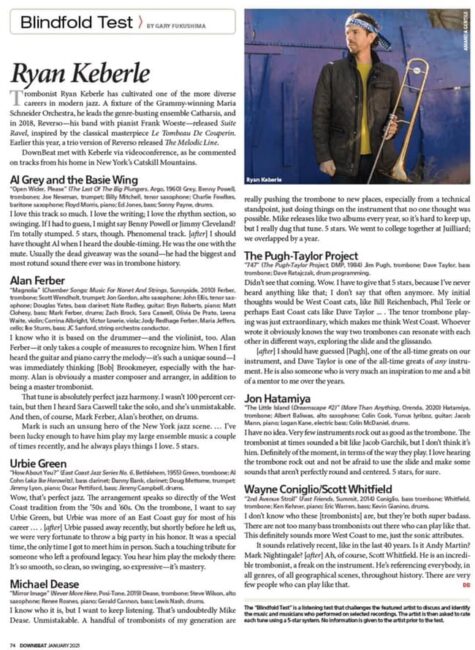 Ryan Keberle
Trombonist Ryan Keberle has cultivated one of the more diverse
careers in modern jazz. A fixture of the Grammy-winning Maria
Schneider Orchestra, he leads the genre-busting ensemble Catharsis, and
in 2018, Reverso—his band with pianist Frank Woeste—released Suite
Ravel, inspired by the classical masterpiece Le Tombeau De Couperin.
Earlier this year, a trio version of Reverso released The Melodic Line.
DownBeat met with Keberle via videoconference, as he commented
on tracks from his home in New York’s Catskill Mountains.

Al Grey and the Basie Wing
“Open Wider, Please” (The Last Of The Big Plungers, Argo, 1960) Grey, Benny Powell,
trombones; Joe Newman, trumpet; Billy Mitchell, tenor saxophone; Charlie Fowlkes,
baritone saxophone; Floyd Morris, piano; Ed Jones, bass; Sonny Payne, drums.
I love this track so much. I love the writing; I love the rhythm section, so
swinging. If I had to guess, I might say Benny Powell or Jimmy Cleveland?
I’m totally stumped. 5 stars, though. Phenomenal track. [after] I should
have thought Al when I heard the double-timing. He was the one with the
mute. Usually the dead giveaway was the sound—he had the biggest and
most rotund sound there ever was in trombone history.

Urbie Green
“How About You?” (East Coast Jazz Series No. 6, Bethlehem, 1955) Green, trombone; Al
Cohn (aka Ike Horowitz), bass clarinet; Danny Bank, clarinet; Doug Mettome, trumpet;
Jimmy Lyon, piano; Oscar Pettiford, bass; Jimmy Campbell, drums.
Wow, that’s perfect jazz. The arrangement speaks so directly of the West
Coast tradition from the ’50s and ’60s. On the trombone, I want to say
Urbie Green, but Urbie was more of an East Coast guy for most of his
career … . [after] Urbie passed away recently, but shortly before he left us,
we were very fortunate to throw a big party in his honor. It was a special
time, the only time I got to meet him in person. Such a touching tribute for
someone who left a profound legacy. You hear him play the melody there:
It’s so smooth, so clean, so swinging, so expressive—it’s mastery.

Michael Dease
“Mirror Image” (Never More Here, Posi-Tone, 2019) Dease, trombone; Steve Wilson, alto
saxophone; Renee Rosnes, piano; Gerald Cannon, bass; Lewis Nash, drums.
I know who it is, but I want to keep listening. That’s undoubtedly Mike
Dease. Unmistakable. A handful of trombonists of my generation are\
really pushing the trombone to new places, especially from a technical
standpoint, just doing things on the instrument that no one thought was
possible. Mike releases like two albums every year, so it’s hard to keep up,
but I really dug that tune. 5 stars. We went to college together at Juilliard;
we overlapped by a year.

The Pugh-Taylor Project
“747” (The Pugh-Taylor Project, DMP, 1984) Jim Pugh, trombone; Dave Taylor, bass
trombone; Dave Ratajczak, drum programming.
Didn’t see that coming. Wow. I have to give that 5 stars, because I’ve never
heard anything like that; I don’t say that often anymore. My initial
thoughts would be West Coast cats, like Bill Reichenbach, Phil Teele or
perhaps East Coast cats like Dave Taylor … . The tenor trombone playing
was just extraordinary, which makes me think West Coast. Whoever
wrote it obviously knows the way two trombones can resonate with each
other in different ways, exploring the slide and the glissando.[after] I should have guessed [Pugh], one of the all-time greats on our
instrument, and Dave Taylor is one of the all-time greats of any instrument.
He is also someone who is very much an inspiration to me and a bit
of a mentor to me over the years.

Jon Hatamiya
“The Little Island (Dreamscape #2)” (More Than Anything, Orenda, 2020) Hatamiya,
trombone; Albert Baliwas, alto saxophone; Colin Cook, Yunus Iyriboz, guitar; Jacob
Mann, piano; Logan Kane, electric bass; Colin McDaniel, drums.
I have no idea. Very few instruments rock out as good as the trombone. The
trombonist at times sounded a bit like Jacob Garchik, but I don’t think it’s
him. Definitely of the moment, in terms of the way they play. I love hearing
the trombone rock out and not be afraid to use the slide and make some
sounds that aren’t perfectly round and centered. 5 stars, for sure.

Wayne Coniglio/Scott Whitfield
“2nd Avenue Stroll” (Fast Friends, Summit, 2014) Coniglio, bass trombone; Whitfield,
trombone; Ken Kehner, piano; Eric Warren, bass; Kevin Gianino, drums.
I don’t know who these [trombonists] are, but they’re both super badass.
There are not too many bass trombonists out there who can play like that.
This definitely sounds more West Coast to me, just the sonic attributes.
It sounds relatively recent, like in the last 40 years. Is it Andy Martin?
Mark Nightingale? [after] Ah, of course, Scott Whitfield. He is an incredible
trombonist, a freak on the instrument. He’s referencing everybody, in
all genres, of all geographical scenes, throughout history. There are very
few people who can play like that.

INTERVIEWED ON THE THIRD STORY WITH LEO SIDRAN

INTERVIEWED ON THE THIRD STORY WITH LEO SIDRAN