I’m thrilled to have been included in the March 2013 Downbeat “Players” section. 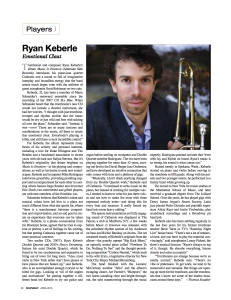 Trombonist and composer Ryan Keberle’s album Music Is Emotion (Alternate Side Records) introduces his piano-less quartet Catharsis and a sound so full of imaginative interplay and boundless energy that the band seems much larger, even with the addition of guest saxophonist Scott Robinson on two cuts. Keberle, 32, has been a member of Maria Schneider’s renowned ensemble since the recording of her 2007 CD Sky Blue. When Schneider heard that the trombonist’s new CD would not include a chordal instrument, she had her worries. “I thought with just trombone, trumpet and rhythm section that the music would be dry or just wild and free with soloing all over the place,” Schneider said. “Instead, it was—wow! There are so many textures and combinations in the music, all there to create this emotional clout. Everybody’s playing is killer, and still there is such incredible control.” For Keberle, the album represents many facets of his artistry and personal interests, including a love for Duke Ellington and The Beatles and a bandstand association in recent years with alt-rock star Sufjan Stevens. But it’s Keberle’s originality that shines brightest on Music Is Emotion—in his playing and compositions, as well as his desire to seek new soundscapes. Keberle and trumpeter Mike Rodriguez intertwine gracefully, providing prodding support and accompaniment for each other in a setting where bassist Jorge Roeder and drummer Eric Doob, two extroverted and gifted players, are welcome members of the frontline, too. Schneider believes that Keberle’s talent and musical values have led him to a place not much different from what she quests for, where “there is a seamlessness between composition and improvisation, and an end goal to create an experience that everyone can be taken with.” Keberle, in a phone conversation from his Brooklyn home, agreed that he tries to capture or portray a set of feelings in his writing, but that putting Catharsis together came out of more practical concerns. Two earlier CDs, 2007’s Ryan Keberle Double Quartet and 2010’s Heavy Dreaming, feature his octet Double Quartet, which he found to be too cumbersome and expensive to bring out of town for long tours. “Also, most clubs in New York either don’t have pianos or have pianos that are beaten up,” said Keberle, who is an accomplished enough ivoryist to be hired for gigs. Looking at “all of the angles and motivations” for putting together a different band led Keberle to try out guitar and organ before settling on trumpeter and Double Quartet member Rodriguez. The two have been playing together for more than 10 years, starting out ﬁ rst in the David Berger Jazz Orchestra, and have developed an intuitive connection that only comes with time and a plethora of gigs. “Musically, I don’t think anything changed from my Double Quartet work,” Keberle said of Catharsis. “I continued to write music on the piano, but instead of creating for multiple voices, I needed to learn to write for just three voices and see how to make the most with three expressed melody notes—and doing this for every beat and measure. It really forced my hand into some heavy editing.” The sparse instrumentation yet fully engaging sound of Catharsis was displayed at The Falcon, a club in Marlboro, N.Y., a few weeks before Music Is Emotion was released, with the substitute rhythm section of Jay Anderson on bass and Richie Barshay on drums. The set consisted mostly of Keberle’s originals from the album—the punchy opener “Big Kick Blues,” an episodic modal piece called “Nowhere To Go, Nothing To See” and the thought-provoking composition “Carbon Neutral,” which nods to his wife Erica, a legislative director for New York City Mayor Michael Bloomberg. The band ﬁ nished with the Lennon/ McCartney number “Julia” and the album’s swinging closer, Art Farmer’s “Blueport,” the two horns sounding clear and bright throughout, the subs maneuvering through the music expertly. Rodriguez pointed out later that “even with Jay and Richie on board, Ryan’s music is so strong, his sound is what comes out.” Raised mostly in Spokane, Wash., Keberle started on piano and violin before moving to the trombone in ﬁ fth grade. Along with his parents and two younger sisters, he performed in a family band while growing up. He moved to New York for music studies at the Manhattan School of Music, and later received a graduate degree from The Julliard School. Over the years, he has played gigs with Darcy James Argue’s Secret Society, Latin jazz pianist Pedro Giraudo and pop/r&b superstars Alicia Keys and Justin Timberlake, plus soundtrack recordings and a Broadway pit band job. Keberle also has been subbing regularly in the last four years for his former trombone teacher Steve Turre in TV’s “Saturday Night Live” house band. “There’s not a lot of rehearsal time, and you have to play the material convincingly,” said saxophonist Lenny Pickett, the show’s musical director. “Ryan’s always on top of it, though. He absorbs everything, listens closely and solos accurately.” “Trombonists are strange because we’re so totally normal,” Keberle said. “There’s no vibe or pretension. To get work, we tend to be resourceful and versatile. But things are opening up more for the trombone, and the trombonists that I know are some of the busiest musicians around these days.”