Of course, this will come as no surprise to most of you, but it’s safe to say that this past season of tours could easily be summed up in two tired words: NO SLEEP! Unlike what they teach you in jazz camp it’s not all glamour and glitz on the road. With that being said, it doesn’t get a whole lot nicer than touring through the Bay Area and Southern California. If it weren’t for the exorbitant rent and lack of jazz venues I’d be high-tailing it out of New York City! Our west coast tour started off with a clinic and performance at Cal State East Bay organized by my fellow trombonist, the venerable Mitch Butler, followed by a double bill performance at the Berkeley Arts Festival organized by the prolific Bay Area jazz clarinetist, Ben Goldberg. Both Mitch and Ben’s hospitality and generosity reminded me of just how important a role the spirit of community and camaraderie continues to play in the jazz world. On a different note, many of our past tours, and probably thousands of other tours before us, have been powered by obscene quantities of quality Mexican cuisine and, I’m glad to say, this tour was no exception after the 26 burritos, 13 quesadillas, and 4 pounds of guacamole we consumed in California. SIDEBAR – Mexican food has become such a staple in our band that we now have a Mexican meal named after our bassist called the Roeder Special. 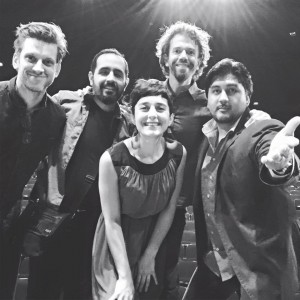 Upon our return to New York City that same sense of jazz community was on full display for our CD release performance at the Jazz Standard with many friends, colleagues, students, mentors, and fans all coming out to help us sell out the first set and fill the second. Keep an eye out for a video or two from this very special gig! 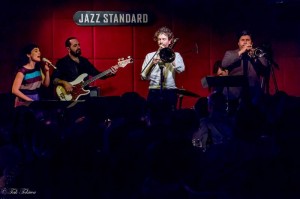 Perhaps the most exciting event for us this past spring was our European debut which began with a performance in a 400 year old opera house atop a 2000 year old Italian hillside village called Bergamo. Unfortunately, we had a total of 12 hours to enjoy this picturesque locale as we flew straight to the UK to play a few gigs and workshops in London and Cork. It was in Cork where our driver (me) got to test out his skills maneuvering our vehicle on the left side of the road with a manual transmission (READ: this means shifting with your left hand!). I’m glad to report that no person, animal, or vehicle was hurt in this test. Our last night in Europe was spent in one of the great cities of the world, Paris, playing at the legendary and historic Duc des Lombards jazz club. You can hear the radio broadcast of that final performance of our European tour here: LIVE at Duc des Lombards 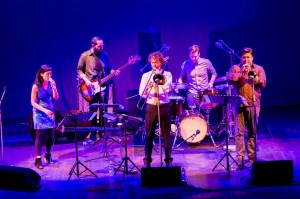 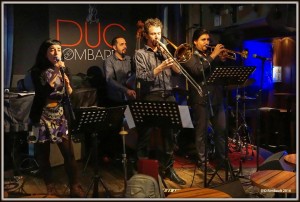 The next morning, while sitting on the Paris tarmac waiting to fly home, unbeknownst to us at the time a terrorist attack was underway at the Brussels airport. This really hit close to home as we paused to consider just how much time we musicians, or anyone who travels for a living, spends in airports around the world. In the face of such brutality, as a performing artist, I feel an even greater urge to bring our music to listeners around the world, especially those with little or no access to live jazz, hoping to provide some sense of hope, peace, beauty, or other quintessence of truth our listeners find.

Our final tour of the season was through the great state of North Carolina via Washington, D.C. Our gig in D.C. was one for the ages, although, not for the reason you might think. In an unfortunate turn of events our 2nd set was cut short after a motorcyclist decided to test out his custom sound system’s maximum volume just outside the jazz club. The club is not known, unfortunately, for it’s superior sound insulation. However, the tour was salvaged in Greensboro, NC with a performance and workshop at the Miles Davis School of Music, a state university program, led by my good friend and great bassist (and my former tenant!), Steve Haines. Steve took us out to a fabulous dinner just down the street from the infamous Woolworth building that effectively sparked the beginning of the civil rights movement in 1960. There now stands a poignant memorial and museum honoring the four courageous freshman college students who sparked a social revolution. Our final gig in North Carolina took place at the majestic Carolina Theater in Durham where we were given the royal treatment – what a beautiful theater and wonderful audience!

Catharsis finished up with performances for a sold out crowd at the Center City Jazz Festival in Philadelphia and then one more show back home in NYC at Rockwood Music Hall. In total, over a 3 month period, Catharsis performed 19 concerts and 9 workshops – easily our most productive period in the band’s 5 plus years together. After some further deep reflection, for those aspiring jazz musicians and band leaders, I’d like to share 7 things I learned as a band leader:

Sign up for our mailing list if you’d like to stay informed of our upcoming concerts around the world (you can find that on our Contact page). We have an exciting 2016/17 season in the works including tours to New England, the Carolinas, Colorado, the Northwest, upper Midwest, and Europe!